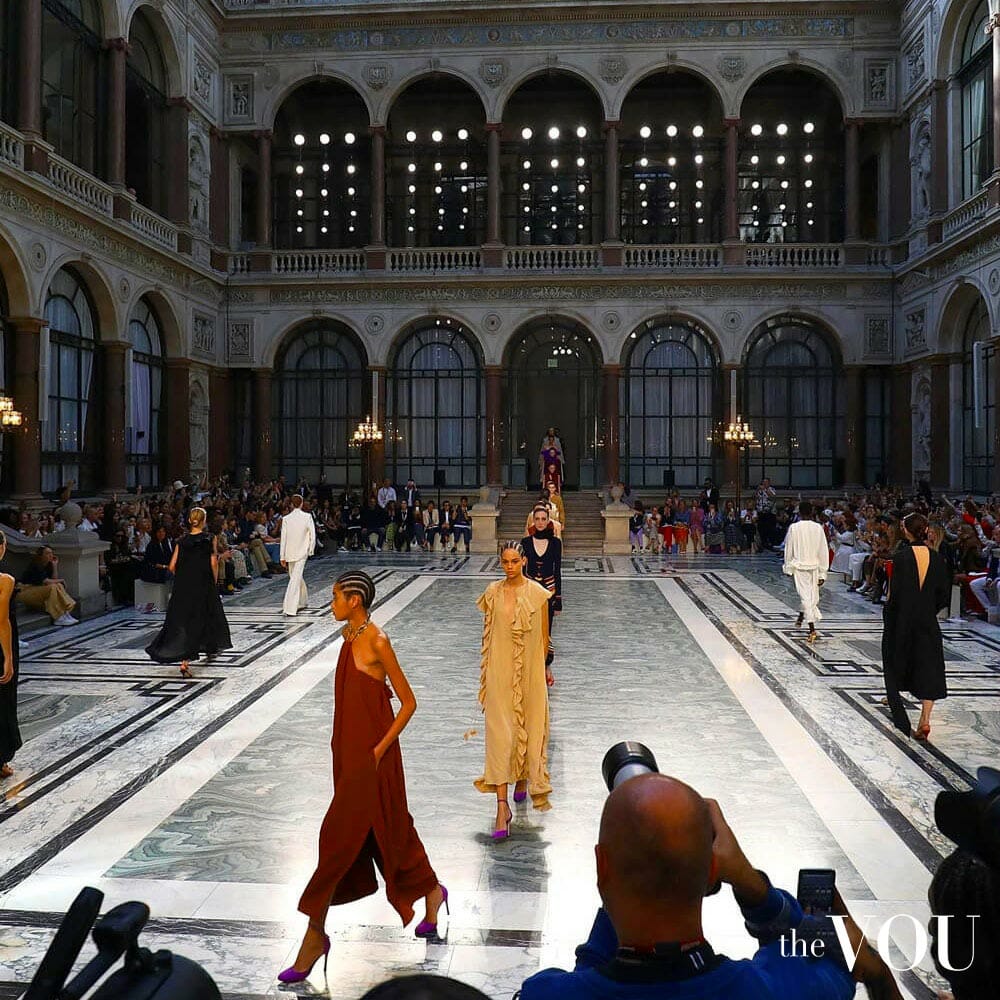 A new wave of popular British fashion brands is emerging fast from Britain, the country of Viviane Westwood, Stella McCartney, and Burberry, to name a few.

In this article, I’ll introduce you to the BEST 21 British clothing brands, loved and worn by Londoners in 2021.

Without further ado, here they are, in reverse order:

ART SCHOOL is one of the most controversial or nonconformist British clothing brands.

The label was founded by two fashion and art graduates, Eden Loweth and Tom Barratt.

The London-based label is very famous for its gender-fluid fashion collections.

The brand’s creations aim to highlight the limitations of ready-to-wear, gendered designs while celebrating the idiosyncratic individuality of queer style.

Hailing from East London, E.L.V. DENIM is one of our favorite British clothing brands.

With a strong emphasis on reducing waste, the label follows a zero-waste design philosophy:

“Every piece of denim we use in production is giving second life to a fabric which otherwise would be destined for landfill,”

The brand’s collections are manufactured in East London, seeking to minimise water consumption and carbon footprint.

For example, it only takes 7L of water to create a pair of E.L.V. DENIM jeans, compared to 7000L for an average pair.

Unlike most of the names in this article covering emerging British clothing brands, E. Tautz has a rich heritage.

Founded by Edward Tautz in 1867, E. Tautz has a rich presence on London’s prosperous Oxford Street.

Ever since the British label has been continuously releasing sporting clothes from innovative materials.

The label is still going to great lengths to source and develop exceptional fabrics.

Priya Ahluwalia launched her label in 2018, after graduating with an MA in Menswear from the University of Westminster.

The designer blends elements from her dual Indian-Nigerian heritage with her London upbringing roots.

The brand works with vintage and ‘deadstock’ apparel to create unique and forward-thinking garments, designed for the modern man.

While studying French and Italian at Oxford University, Mahtani decided to create a modern jewellery label, inspired by her studies.

And, just like Dante’s subjects, each piece of jewellery is battered, imperfect, but with story to tell.

Aries is an established British fashion label helmed by the Italian-born and English-based, Sofia Prantera.

The label is famous for its cult-like streetwear collections for women.

Often associated with Romeo Gili and Giorgio Armani, Aries’ creations have a unique, sensual touch, which sets them apart from these established labels.

Craig Green is the creator behind the British fashion label with the same name.

A graduate of Central Saint Martins, the London-born designer explores new concepts of uniform and utility in menswear collections.

David Koma is one of the upcoming British clothing brands, known for its ‘sculptural statement’ dresses inspired by the feminine silhouette.

With a first collection at the age of 15, David has showcased at London Fashion Week twice so far.

Bianca Saunders is one of the most popular gender-neutral clothing labels hailing from London.

The menswear designer label was launched by Bianca in 2017, following her graduation from The Royal College of Art.

The label seeks to disrupt the conventional gender stereotypes in fashion with ultra-contemporary collections.

Founded by the Canadian-British designer with the same name, this British label is known for its immersive and performative shows at London Fashion Week.

The designer puts a lot of emphasis on precision cut, hand-made details, and femininity of form.

Here’s how Edeline Lee depicts her novel concept of fashion:

“Female identity is in flux, in our generation. Modern women live hectic, collaged lives AND can’t subscribe to HISTORICAL identities that have been laid out IN THE PAST. Women now are more powerful, stronger, more aware, AND more capable than any other time in history.“

Eftychia is a womenswear brand with a focus on traditional menswear tailoring.

The British fashion brand was launched in 2017 by the Greek fashion designer and Central Saint Martins graduate, Eftychia Karamolegkou.

This British fashion brand is known for its beautiful creations of relaxed feminine style infused with subtle masculine details.

Halpern is one of the modern British clothing brands that bring back to life sequin designs.

Launched in 2016 by Michael Halpern, a London-based designer, the label’s disco-inspired aesthetic is a fresh breath of colour and craftsmanship.

King & Tuckfield is one of our favourite British clothing brands, thanks to its ‘slow fashion‘ philosophy.

Launched in 2016 by Stacey Wood, the brand combines sustainable materials with the rare art of tailoring. Kwaidan Editions label was founded by the fashion designers and husband and wife, Léa Dickely and Hung La, in 2016.

‘Kwaidan Editions’ originates from the 1965 movie of Masaki Kobayashi and the book of Lafcadio Hearn, both with the same name.

Helmed by Marco Capaldo and Federica Cavenati, a design duo and life couple, this British fashion label has anchored its confident narrative in “design for a good time”.

According to its founders, 16Arlington makes clothes “with stories to tell, the morning after.”

The brand’s uncompromising and straightforward vibe has supporters from all around the world.

Chopova Lowena is another British clothing brand with sustainability at the core.

The label is the joint creation of Emma Chopova, an American-born designer from Bulgarian parents, and Laura Lowena, a British designer.

Thanks to its co-creators beautiful cultural blend, Chopova Lowena’s designs are rare ‘letters’ of traditional craft and responsible sourcing. This British fashion brand was founded in 2013 by the designer Liam Hodges.

The London-based luxury streetwear brand caters for those who forsake conformity.

Liam Hodges aims to serve the ‘online-born’ generation who has its own definition of being successful. Matty Bovan was founded by the 27-year-old designer with the same name.

The York-based designer has a cheeringly unconventional approach to fashion couture.

Founded by Charles Jeffrey, Loverboy is one of the upcoming British clothing brands taking the fashion community by storm.

The clothing label has earned an LVMH Prize nomination and won the British Emerging Talent prize at the 2017 Fashion Awards.

The label is also known for its controversial femboy aesthetic clothes.

Bethany Williams is a UK-based clothing designer label with sustainability at heart.

Founded by the designer with the same name, Bethany is one of the most famous British designers right now.

Founded by Hussein Chalayan, a Turkish Cypriot/British fashion designer, Chalayan is one of the most innovative British clothing brands to date.

Thanks to his obsession with technology, Chalayan’s future-gazing creations transcend the runway.

Known as ‘fashion’s big thinker’, the designer continually challenges the idea of what fashion is and what it can be.

In fashion critic’s eyes, this British fashion brand has a safe place in the company of Alexander McQueen and John Galliano.

With the hope you’ve enjoyed our selection of ‘most promising upcoming British fashion designers right now, here are a couple of questions for you.

Which upcoming and popular British clothing brands do you feel we should cover next and why?

Leave your answers in the comments so others can benefit from your expertise.

You have Successfully Subscribed!